The international break has forced upon us unwelcome breather in what has been an electric start to the Premier League campaign. For Gareth Southgate and co, though, there’ll be no resting easy over the coming week.

The Three Lions kick things off with a ‘friendly’ against Wales this evening, with Nations League tussles with both Belgium and Denmark scheduled for Sunday and Wednesday respectively.

With the postponed European Championships now due to take place next summer, Southgate will be looking to solidify his favoured starting eleven sooner rather than later.

One position that has to be considered up for grabs is between the sticks.

Jordan Pickford was the man trusted to defend England’s grace and glory in Russia in 2018, and did so heroically, it must be said.

However, the Everton man’s form has tailed off ever since stepping off the plane from the tournament, leaving Southgate with a decision to make. 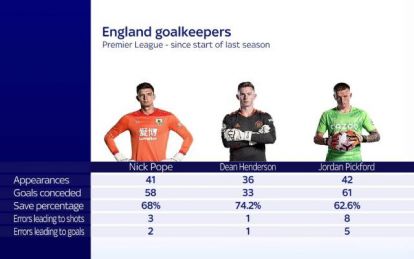 It’s clear as day that Pickford is (at least statistically) the weakest goalkeeper on the list – with five errors leading to goals since the start of last season. Manchester United number two Dean Henderson boasts the best save percentage of the three.

It’s for that reason it comes as no surprise that the accompanying poll which Sky Sports ran on their Twitter saw Henderson be crowned the fan favourite to start in goal for England in the games ahead.

Ahead of @England‘s upcoming fixtures, we want to know who you think should be first-choice ‘keeper for the Three Lions? ???

Vote below and let us know why in the replies! ?

It seems likely that Southgate will chop and change in goal over the next three fixtures, just as he will in every other position across the pitch.

While he builds a clearer picture of what his best XI looks like, and also taking into account the unprecedented recent fixture congestion, there’ll likely be plenty of rotation across the board.