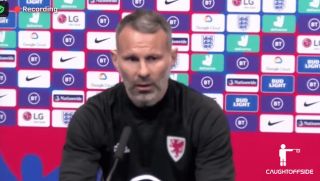 It was a great night for England at Wembley as they put Wales to the sword by three goals to nil in their friendly.

All three goals could’ve been avoided with a better standard of defending, but Wales manager, Ryan Giggs, had more to worry about in the lead up to the double header against Ireland and Bulgaria.

Influential striker, Kieffer Moore, had to be taken off before half-time with what looked to be a serious injury, and one which Giggs admitted was a blow to his side.