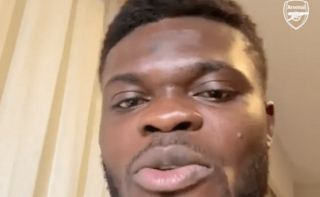 It was a transfer that had been rumoured all summer long, but it wasn’t until the final day of the window that Arsenal managed to secure Thomas Partey as their new midfield signing.

Their payment of his release clause meant that there was nothing Atletico Madrid could do about the negotiations between the north Londoners and Partey, leaving the Spanish side light in that area of the pitch.

It’s clear from a video posted on Arsenal’s official Instagram account that the Ghanaian is absolutely delighted with the move, with Gunners fans having to wait until after the international break to see him in action.

? It’s time to hear from the man himself… #NoThomasNoPartey #Arsenal #Partey #AFC