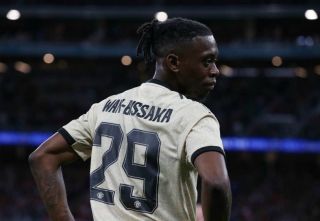 Manchester United full-back Aaron Wan-Bissaka has hinted that he could opt to represent Congo over England on the international stage after the defender changed his social media biography.

READ MORE: ‘I knew the pain he felt, as I did’ – Suarez cites Messi as he lays into Barcelona’s board again

Wan-Bissaka, 22, joined United last summer from domestic rivals Crystal Palace in a move which costs the Reds £49.5m as per TransferMarkt.

The talented young full-back has become best known for his defensive capabilities after a string of fine performances last season saw the full-back emerge as one of the league’s best defenders.

However, internationally, Wan-Bissaka has found himself fall down the pecking order after the emergence of the likes of Liverpool’s Trent Alexander-Arnold and Chelsea’s Reece James have meant manager Gareth Southgate has favoured both of Wan-Bissaka’s compatriots over the talented 22-year-old.

Having failed to represent either country at senior level, the 22-year-old is still available to take his pick of which country he would prefer to play for.

It appears the United full-back has now made that decision after he recently removed the England flag from his social media bio.