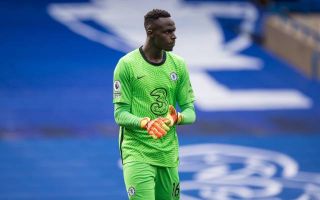 Chelsea have released a statement on the club’s official website after goalkeeper Eduoard Mendy appeared to pick up an injury on international duty on Thursday night.

The Blues signed Mendy from Rennes in the summer transfer window, hoping that he could be the solution they were looking form following the struggles of Kepa Arrizabalaga.

Mendy kept a clean sheet on his Premier League debut against Crystal Palace last time out, but it remains to be seen whether he will be available for selection when the international break comes to a close.

News broke last night that Mendy had picked up an injury, and now Chelsea have released further details.

On the club’s official website, they note that the ‘keeper has left Senegal’s training camp in order to return Cobham for further assessment and the necessary rehabilitation.

The club report that the goalkeeping giant has suffered damage to his left thigh, the extent of which is not yet known, meaning Chelsea fans face a nervous wait to discover how long he will be out for – if at all.

There’s no doubt that Kepa will have one eye on this situation, too, as it very much appeared as though he had lost his spot to the new-boy. Could this be an opportunity for him to win it back?