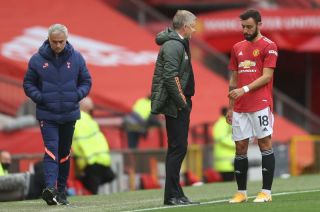 Manchester United star-midfielder Bruno Fernandes was reportedly left disappointed after manager Ole Gunnar Solskjaer substituted him during the Reds’ crushing 6-1 defeat to Spurs as growing concerns for the Norwegian manager continue to rumble on.

Fernandes, 26, joined United earlier this year in January from Sporting Lisbon in a move which cost the Reds’ £49.5m as per TransferMarkt.

The talented Portuguese midfielder’s impact on United cannot be underestimated after the 26-year-old has been directly involved in 24 goals during his first 26 matches in all competitions.

However, Fernandes’ last appearances in a United shirt was one to forget after the Reds were thrashed 6-1 by Jose Mourinho’s Spurs last weekend.

According to The Athletic United’s Portuguese maestro was left disappointed after being substituted early into the game’s second-half following the dismissal of striker Anthony Martial for violent conduct on Spurs’ Erik Lamela.

The report claims that Fernandes was the one United player who aired his discontent the most in his side’s dressing room at half-time.

However, despite the midfielder’s passionate display, manager Solskjaer still opted to drag him off in the 46th minute.

The report highlighting the anger among the United ranks comes as pressure continues to mount on manager Solskjaer whose position remains under threat after the Daily Star claim Mauricio Pochettino is being lined-up as the Norwegian’s successor.