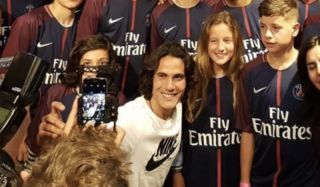 A photo showing Manchester United’s new signing Facundo Pellistri with leading striker Edinson Cavani has emerged during the opening of a popular sports shop all the way back in 2017.

Pellistri, 18, joined United this summer and became the last of four deadline day signings including compatriot Cavani who was announced as a Red earlier in the day on Monday, as per ManUtd.com.

The youngster who is also Uruguayan was snapped during the 2017 inaugural opening of Montevideo’s Nike store alongside hero Cavani.

Pellistri aged just 15 at the time the picture was taken surely never believed that in a few years time would be playing alongside the elite striker.

Facundo Pellistri with Edinson Cavani in October 2017 at the inauguration of the Nike store in Montevideo #mulive [u/____ZeeZee____] pic.twitter.com/glfrRWNI4K