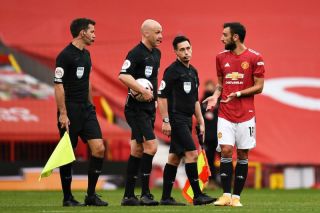 Fernandes, 26, joined United in January from Sporting Lisbon in a move which cost the Reds’ hierarchy £49.5m as per TransferMarkt.

Despite only arriving in Manchester less than 12-months ago, Fernandes has provided the Reds with a much-needed injection of enthusiasm as the Portuguese midfielder boasts a stunning goal involvement record of 24 in 26 appearances in all competitions.

However, according to a recent report from The Mirror the elite midfielder is also having his say off the field of play after reports emerged suggesting that Fernandes was left furious during his side’s thrashing against domestic rivals Spurs last weekend.

The Mirror claim that an unnamed matchday official has revealed that Fernandes was heard angrily shouting from inside the United dressing at half-time at his team-mates and also criticised manager Solskjaer’s tactics.

The report goes onto quote the matchday official’s recollection of last weekend’s events, the source said: “You couldn’t help but hear him.

“He was clearly in a rage after having a face like thunder when he raced down the tunnel.

“It was clear that the manager also came under fire because he was going on about the wrong tactics.

“There were other raised voices, but his was the one which seemed to carry the main force.”

As the side’s remerged from the tunnel for the second-half, Fernandes was soon substituted-off at the 46-minute mark.

The Mirror’s shocking report comes days after The Athletic also claimed the Portuguese midfielder was left ‘upset’ after his manager’s decisions to haul him off the pitch.