Barcelona boss Ronald Koeman has claimed in an interview with Barca TV+ that young defender Ronald Araujo has a ‘great future’ ahead of him.

Koeman, who took over this summer after Barcelona’s embarrassing end to last season, hailed Araujo for being ‘physically strong and pretty fast’.

The Dutchman also hinted that he’s impressed by the fact that Araujo is ‘always open’ to learning new things, whilst reiterating the centre-back’s desire to learn.

The Uruguayan talent joined Barcelona in the summer of 2017, after impressing for the B team, Araujo broke into the first-team last season. 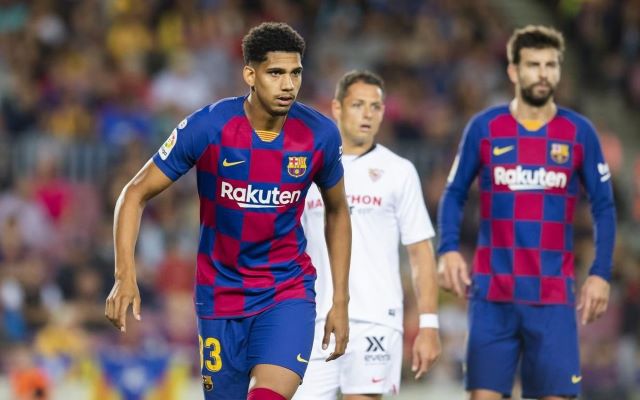 Ronald Araujo in action for Barcelona.

Here’s what Koeman had to say on the talent:

“Araujo has a great future ahead of him. He is physically strong and pretty fast. He is a kid who wants to learn. He is always open to learning new things. He has things to improve, which is normal at his age.”

The youngster has made two outings so far this term, coming on at halftime after Clement Lenglet was sent off before Celta Vigo, before filling in for the Frenchman in the draw against Sevilla.

Gerard Pique and Lenglet have maintained their usual positions as the starting centre-back pair, with the only other senior options Araujo and injury-prone Samuel Umtiti – who is currently sidelined.