La Liga president Javier Tebas has confirmed, as if we didn’t know it already, that the Premier League remains the top league in the world, report ESPN.

It’s often a point which football fans like to argue over, whether the Premier League or La Liga stands proud as the number one league on the planet.

Since it’s inception back in 1992, the Premier League has been out in front, but La Liga has shortened the margin in recent seasons, with the demolition of English teams by their Spanish counterparts in the Champions League being evidence of that.

However, La Liga’s president himself, Javier Tebas, has revealed his belief that the Premier League remains the benchmark that the Spanish top tier strive towards – at least financially. These quotes are as reported in English by ESPN, with the original interview being conducted by La Gazzetta.

“Our next aim is that we want to beat the Premier [League]. We have La Liga offices all over the world, hundreds of people working with us. It is important to be present in the most populated and rich countries to promote, to try to expand, to find local sponsors that will help us grow economically.”

The competitiveness and drama of the Premier League are unrivalled – hence why it is the most watched league on the planet. It would take a seismic for that to change in favour of La Liga.

Tebas has done a fine job in bringing La Liga as far as he has since being appointed back in 2013, but he has an uphill battle to take it any further – unless, as some fear, fans will be priced out of the Premier League.

La Liga continues to grow its presence in North America as it forms partnerships with the most popular league in the region May 27, 2021 20:34
Atletico Madrid 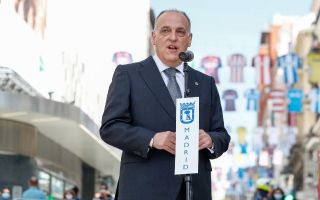 “I don’t think Serie A has improved much” – La Liga President Tebas protests a little too much over Cristiano Ronaldo’s Juventus transfer November 15, 2020 14:55
Juventus