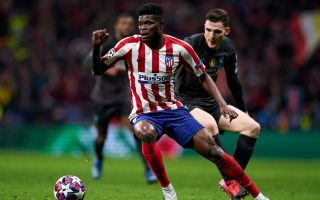 Thomas Partey’s father, Jacob, has told My Joy Online that he ‘hoped’ for a ‘bigger team’ than Arsenal to sign his son, with the family well aware of interest from Juventus and Chelsea.

Arsenal left it until Deadline Day to recruit their long-standing target, with the Independent reporting that the Gunners’ hierarchy sanctioned the £45m transfer after Mikel Arteta’s personal request.

Partey had worked wonders for Atletico Madrid over the past few years, steadily establishing himself as one of Diego Simeone’s most trusted players after emerging on the scene as a raw talent.

With Jacob shedding light on the biggest moment of his son’s career during the international break, here’s a look at Thomas producing a sensational assist for Ghana against Qatar earlier today.

Update: It’s unclear whether Jacob meant that they were hoping for a ‘bigger team’ than Arsenal to come in for Partey or simply the ace joining a bigger club than Atletico Madrid.

Thomas Partey is the kind of midfielder that Arsenal have been crying out for.

Here’s what Jacob had to say on how he felt about his son’s future on Deadline Day:

“Yes. Actually you made that statement and some pictures came and Partey wasn’t in them [laughs] we were surprised but meanwhile I had told my wife that he’ll be moving because the way the Arsenal fans were calling and Joy News group was also doing their thing so I told my wife we should keep cool.”

“We actually weren’t disturbed by anything because we hoped a bigger team will come for Partey. We were aware of the [other teams that were interested]: Juventus, Chelsea and so forth.”

“So about all these we knew God was with us. From that minute we started to dance to ‘Party after Party’.”

Partey was one of Europe’s standout box-to-box midfielders last season, with the star finally earning the plaudits he deserved after some dominant performances in the Champions League against Liverpool.

The 27-year-old’s defensive ability is well documented, but Partey is also an excellent dribbler that can really give Arsenal some drive from midfield.

It’s certainly quite embarrassing for Arsenal that Partey’s father has come out and explicitly mentioned they were hoping for Thomas to join a ‘bigger team’.

Nonetheless, we’re sure that fans won’t mind this bit of shame if Partey helps the north London outfit reestablish themselves as a consistent Champions League, whilst even contending for major honours.