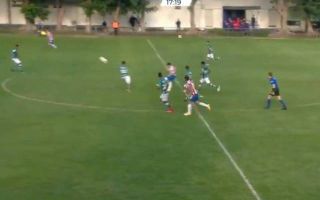 It’s not often a goal scored by Chivas’ U-20 side would get mainstream coverage, but this strike from Chofis Lopez is something quite special.

In fairness, it’s not common that a 26-year-old would net for a club’s U-20 side either, but players oftentimes drop down a level in order to build their match fitness before competing in the first-team.

Chofis certainly showed the youngsters how it’s done, scoring a goal from the halfway line that most players could only dream of pulling off. The audacity to even attempt something like this is commendable in itself.

Have a look at this beauty.

What’s remarkable is that he doesn’t even appear to look up before taking the strike. He must have already noticed earlier in the game that the Leon U-20 ‘keeper was standing off his line.

Having the ability to perfect the execution from such a distance is really quite something.. He’ll probably never strike a ball better in his career, as long as he plays…