Using information provided by Transfermarkt, we’ve put together an XI of players whose contracts will be expiring in the summer of next year – and it’s insane.

Bear in mind that as soon as January all of these players will be able to begin negotiations with potential future employers over pre-contract agreements. Their clubs better act fast to get them tied up!

GK: Gianluigi Donnarumma: Donnarumma was a ready-made replacement for Gianluigi Buffon in the Italian national team and has established himself as a cornerstone in AC Milan’s starting eleven. It would be disasterous for the Rossoneri to allow the 21-year-old to walk out the door without receiving a penny in return.

RB: Elseid Hysaj: The 26-year-old has been a prominent figure in Napoli’s defence over the last five-years, but his time at the Serie A giants could soon come to an end, should he be unable or unwilling to agree an extension to his contract, which Transfermarkt report expires in the summer of 2021.

CB: Sergio Ramos: The Real Madrid legend is still very much at the top of his game, so it would be a little bit of a surprise if Florentino Perez let him walk away from the Santiago Bernabeu. However, as it stands, he’s six months away from being able to talk to other clubs. That’ll no doubt have a fair few on high alert.

CB: Jerome Boateng: World Cup winning Boateng still has plenty to offer at 32-years-old. He has spent the best part of a decade at the Allianz Arena. With his contract expiring, any club in the world would be lucky to have a centre-back with such pedigree.

LB: David Alaba: Widely regarded as one of the best left-backs of his generation, Alaba is also able to play both centre-back and in midfield. He’s been a key figure over in a period of huge success for Bayern Munich – but could now be the time the Austrian looks for a new challenge?

CM: Luka Modric: Now 35-years-old and in the swansong of his career, the time may have come for Ballon d’Or winning Modric to move on from Real Madrid. Whether he still feels as though he has enough to offer at the top, or he will opt for a payday somewhere sunny instead, is yet unclear. But either way, he’s earned it.

CM: Fernandinho: Brazilian Fernandinho is a veteran at the Etihad, but his importance to Pep Guardiola’s men is perhaps as great as it has ever been. His manager would no doubt like to phase him out in favour of a younger model, but he’s still too good and too important not to play. If he leaves, he’ll be one hell of a capture for anyone who’s interested.

CM: Angel Di Maria: The former Real Madrid and Manchester United winger-cum-midfielder will be 33 come the expiry of his PSG contract, but it’s difficult to imagine there being any shortage of interest in him considering the Argentine’s performances over the past few seasons in Paris. PSG let Thiago Silva and Edinson Cavani walk out the door this summer – could Di Maria be next?

RW: Lionel Messi: After all the drama this summer, Messi remains at Barcelona player – but for how long? With his contract set to run out next summer, the greatest player of all time could be snatched up on a free. Might a Premier League switch be on the horizon? We certainly hope so!

LW: Memphis Depay: As Goal report, Memphis Depay is high up Barcelona’s transfer wish list. While they were unable to secure his signature this summer, missing out may have done them a favour, for as per Transfermarkt his contract with Lyon will be expiring soon. They could yet get him for free

ST: Sergio Aguero: Aguero is one of the greatest strikers the Premier League has ever seen, but unfortunately he’s not getting any younger. The Argentine looks sure to fall short of Alan Shearer’s all-time Premier League record, but his name has been written into the league’s history books nonetheless. What a striker.

Here’s how the team shapes up in full. Would this side win the Champions League? 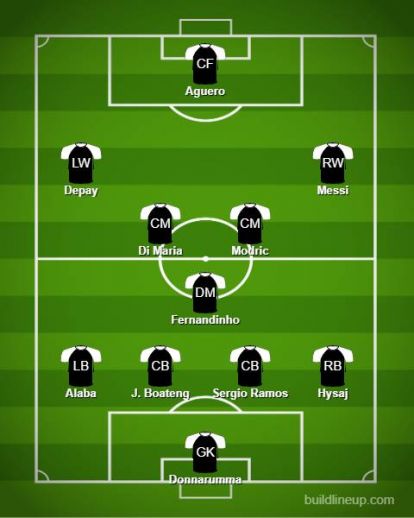