Telegraph journalist Matt Law has confirmed on Twitter that recent reports of a downturn in N’Golo Kante and Frank Lampard’s relationships are nonsense.

French outlet Le Parisien reported that Lampard’s refusal to allow Kante to skip training so that he could attend a wedding has left the World Cup winner with resentment towards the Chelsea manager.

Considering how important Kante has been for Chelsea over recent seasons, reading that news will have no doubt have been of a great concern to the Blues faithful.

Thankfully, there appears to be absolutely zero truth to it.

Matt Law, whose word tends to be gospel when it comes to Chelsea related news, has confirmed via Twitter that Kante and Lampard are absolutely fine and Le Parisien’s report is inaccurate. 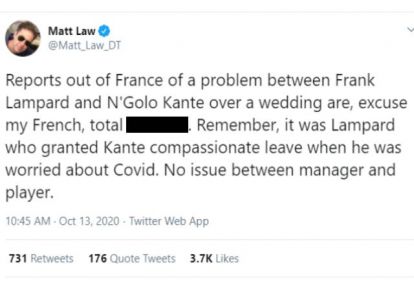 Competition for places in Chelsea’s midfield has scarcely been as intense as it is now, but you fancy a player of Kante’s quality to prove his worth to Lampard and nail down a starting spot.

There’s plenty more to come from N’Golo in SW6, so it seems, so Chelsea fans can rest easy.