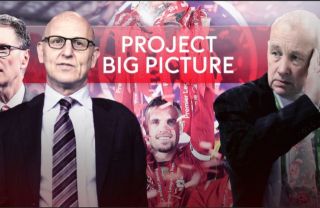 If Man United and Liverpool were actively working on something big behind the scenes then you knew something suspicious was going on, and the footballing news has been dominated by the so-called “Project Big Picture” in recent days.

There were a lot of different arguments flying around but it looked like the main concerns centred around giving all the control to the biggest clubs in the country.

A lot of the lower league clubs were offered a share of the revenue to try and tempt them on board, and it’s understandable when you see a lot of clubs who are struggling to simply survive at this point.

In essence it looked like the “big six” would get all the power to act in their own self interests going forward while the smaller clubs would be given money to buy their support, so it was always going to come down to getting the other Premier League teams to agree.

That always looked unlikely, and it now appears that the project will need to be abandoned after fierce opposition:

That report suggests the other teams were concerned that it would simply give all the power to a few big clubs, while they were also unhappy that it would abolish the “one club, one-vote democracy” that’s currently in place too.

This will come as a major blow to United and Liverpool and it probably leaves them looking a bit stupid, so it will be interesting to see the fallout that comes from this.