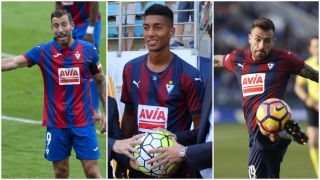 A trio of Spanish football players are reportedly facing lengthy jail sentences for the sharing of an explicit video without third party consent.

The players in question are Eibar striker Sergi Enrich and his former teammates Antonio Luna and Eddy Silvestre, according to a report from Football Espana.

The players could face as much as five years in prison for the recording and sharing of this video, in an incident which dates back to October 2016.

The footage was recorded on a mobile phone, though there is not a lot more detail given about the contents of it.

The trial is expected to take place in a Criminal Court of San Sebastian, and it’s certainly not looking good for Enrich, Luna or Silvestre.

This is an ugly episode and one just hopes justice can be done at the end of it all.