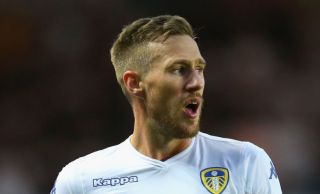 Promotion to the Premier League always means that some players will need to move on if the step up is too much, and that appears to be the case for Barry Douglas at Leeds.

It certainly looks like he’s a popular player at the club and he’s got plenty of quality, but a report from Football Insider has indicated that Douglas is currently having a medical at Blackburn Rovers ahead of a season long loan deal.

They also state that Watford were looking to sign the Scottish full back but Blackburn have won the race, and it should go through fairly soon as long as everything goes well.

Douglas has always been an attacking left back who had supreme quality from set pieces, and he could’ve played a lot more for his country if it wasn’t for the presence of Andy Robertson and Kieran Tierney.

Interestingly Douglas and Robertson followed the same path of part time football at Queen’s Park to Dundee United before getting a bigger move, and he’s certainly good enough to contribute for a Championship side pushing for promotion.