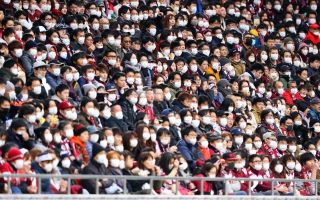 Parliament will reportedly now debate the potential return of fans into football stadiums after a petition surpassed its target of 190,000 signatures.

There are growing calls for football games to be reopened to the public despite the ongoing coronavirus crisis gripping the world, and with local lockdowns being implemented in high-risk areas in the UK at the moment.

It perhaps seems unrealistic to hope for fans to get back to games any time soon, but there are many who’d argue that it seems unfair to allow this outdoor activity to take place when indoor venues like theatres are functioning more like normal.

The Daily Mirror report that parliament will now debate this issue, but one imagines the best time to call for fans to come back has probably gone, at least for the next few months.

The Premier League was able to restart in the summer when COVID-19 cases were low in most of the UK, and with hindsight it might have been possible for games to go ahead with a reduced capacity crowd rather than behind closed doors.

Illnesses like this tend to spread more in the autumn and winter, however, and the recent figures back that up.

It would be great to see at least a small number of supporters back as soon as possible, but the health and safety of the nation and potential pressures on the NHS must come first.