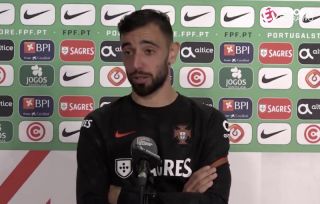 Manchester United midfielder Bruno Fernandes has added to his recent comments addressing speculation that he has fallen out with manager Ole Gunnar Solskjaer.

Fernandes, 26, joined United from Sporting Lisbon in January for a fee of £49.5m as per TransferMarkt and has since gone on to be directly involved in an impressive 24 goals in 26 matches in all competitions.

Despite the Portuguese midfielder’s devastating impact, Fernandes was unable to do very little to prevent his side’s 6-1 thrashing against Spurs last time out.

According to a recent report from The Mirror Fernandes was overheard by a matchday official storming into the dressing room at half-time where he unleashed a rant at team-mates and Solskjaer.

The Mirror’s report was echoed by The Athletic who claim the midfielder was left upset after being hauled off just one minute into the second half.

However, despite these stunning reports, Fernandes himself recently addressed the speculation surrounding his relationship with Solskjaer during a recent interview whilst on international duty with Sport TV (via A Bola), he said: “There’s been a lot of speculation about that.

“I believe it is a way to destabilise the group. What was said is in no way true.

“I was replaced at half-time, it is true, by technical option. The coach told me that the game was almost over and that we would have a lot of games ahead of us. Got it. I was not satisfied but said nothing that could harm the group.

“Do not use my name, my colleagues or the coach to make trouble at Manchester United.

“The atmosphere is good and the team is ready to give an answer in the next game.”

However, Fernandes has gone even further to reassure fans there is no behind-the-scenes issues with Solskjaer after Esporte Interactivo reporter Arthur Quezada released footage showing the Portuguese midfielder speaking about the United camp for a second time.

Fernandes’ statement directly translates to: “Obviously for me it’s very ugly to see my name associated with this because it’s a lie.

“I talked to my coach and said I was going to defend him publicly, because he knows how much I appreciate him. And I’m very grateful, because he bet on me, he wanted me at Manchester, and at no time am I dissatisfied with his tactics.

“Because the way we play is the same as when I arrived. Why would I be dissatisfied at that moment and six months ago, for example, I wasn’t?

“If anyone wants to cause a conflict within Manchester it’s not me nor any teammate, they are outsiders, they want to create a bad atmosphere in the dressing room and they will not succeed, because the group is united and is focused on giving an important answer already in Newcastle.”