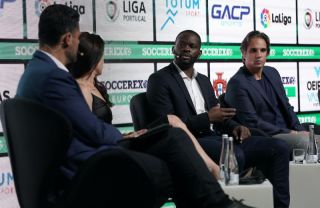 Former Manchester United striker Louis Saha has issued a rallying cry to the Reds’ hierarchy and has pleaded with them to stick with current boss Ole Gunnar Solskjaer amid increasing speculation suggesting the Norwegian could be axed.

Saha, now retired, joined United in 2004 from Fulham in a move which cost the Reds £15.9m as per TransferMarkt and went onto spend four successful years at Old Trafford.

The former French attacker featured in a total of 142 matches for United and was directly involved in 62 goals in all competitions during a spell which saw Saha lift five major trophies including back-to-back Premier League titles and one Champions League trophy.

Despite joining domestic rivals Everton over a decade ago, Saha has been forced to watch his old side become a shadow of their former selves after legendary boss Sir Alex Ferguson vacated the Old Trafford hot-seat.

Current manager Solskjaer who was named as United’s permanent manager in March 2019 has found himself come under fire in recent times after a poor start to the new 2020-21 campaign has seen his Reds win just one of their opening three league fixtures.

During an interview with TeamTALK, Saha has weighed in on the mounting speculation that Solskjaer could be set for the boot after a recent report from The Mirror claimed vice executive-chairman Ed Woodward was prepared to sack Solskjaer in favour of Mauricio Pochettino.

“We are rushing to make a judgement on Ole and that is wrong after three games of the season,” Saha said.

“You remember when he got the job. Everyone was convinced he had to be given a chance after they beat PSG in the Champions League at the start of 2019. They were playing some great football.

“I played with Ole and maybe you will say I am biased when I defend him. But I think we should not forget the really visible improvements we have seen from United in the last year.

“Now things are going in a different way. But it is the start of the season and you have to understand why it is not perfect at this moment.

“You cannot forget everything that has happened in the last year and sack another manager just because they had a bad start to the season.

“This is not an easy job. It is tough to be manager of Manchester United and live up to the expectations that got with the job.

“But ditching a manager after three or four games of the season is not the way to go. Changing managers every year or after a bad couple of results doesn’t work.”

Saha went onto say that he believes a much-needed win at Newcastle United on the weekend could transform the atmosphere surrounding the club, he said: “Right now, I feel there is a lack of energy in the team.

“That may be because the players did not have much of a pre-season and are straight into games. But I believe that squad can still be a threat this season. There is a lot of talent in the dressing room.

“Remember what the atmosphere was like before Ole got this job. Some players were trying to leave, others wouldn’t sign contracts because the atmosphere at the club was very bad.

“That changed last season and that was down to Ole. People tend to forget this.

“There may be managers out there who have won more, but I still feel Ole can do a great job for United.”