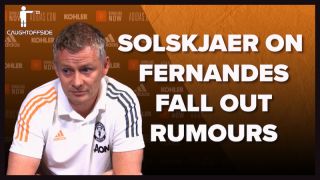 Manchester United manager Ole Gunnar Solskjaer has addressed the mounting rumours that there is discontent among the Reds’ camp with speculation that midfielder Bruno Fernandes is not happy with the Norwegian.

READ MORE: ‘Demand stuff to keep their mouths shut’ – Bendtner reveals how he was blackmailed into paying for a girl’s boob job

Speaking in today’s press conference ahead of his side’s important Premier League tie against Newcastle United on the weekend, Solskjaer has issued a firm statement that his United squad will remain ‘united’ and promised that the intensifying speculation will not ‘create a division’.

Solskjaer’s statement comes in light of recent reports suggesting midfielder Fernandes was left upset after being hauled off after just 46 minutes during his side’s 6-1 thumping against Spurs, as per The Athletic.

“He’s [Fernandes] not used to losing league games for us.

But Bruno – Welcome to Man United! This is what happens when you lose a couple.

They’re going to try and create a division between us. But that’s not going to happen.”#mufc #mulive pic.twitter.com/AJbcNp5yfn