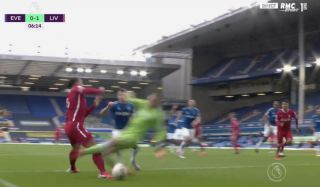 He’s got away with one here.

Everton goalkeeper Jordan Pickford is a very lucky boy to still be on the Goodison Park pitch.

After going 1-0 down after just three-minutes through a Sadio Mane goal, Liverpool came close to being awarded a penalty just minutes later after Pickford clattered into Van Djik.

Pickford’s heart would have been in his mouth if it weren’t for a close VAR inspection eventually ruling the Liverpool captain marginally offside.

Pickford’s challenge on Van Djik is not pretty and has resulted in the Dutchman needing to be substituted off after just 10-minutes.

"He could have easily been sent off."

"I'm very surprised it's just been forgotten about?"

Should VAR have stepped in after this? pic.twitter.com/wTcW6CHcIf