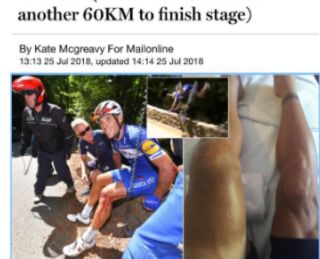 There’s no doubt that Virgil van Dijk’s injury has got a lot of people taking today, but there are so many stories going around that it’s hard to tell what’s accurate.

He’s certainly going to be out for a long time after Liverpool confirmed he was needing surgery:

Virgil van Dijk will undergo surgery on the knee injury sustained during Saturday’s 2-2 draw at @Everton.

Following surgery, Virgil will begin a rehabilitation programme to enable him to reach full fitness as soon as possible.

Shortly afterwards there was an image circulating that appeared to show van Dijk’s knee, and it certainly looks gruesome:

Van Dijk will most likely never come back the same… pic.twitter.com/0waC3kRqDz

It immediately looked doubtful that this was genuine when fans started to point out inconsistencies with the Dutch star, and this image confirms that it’s from something else completely:

The injury is bad enough without spreading images which are false, and it’s likely the player will share these himself at some point anyway to illustrate his comeback in the future.