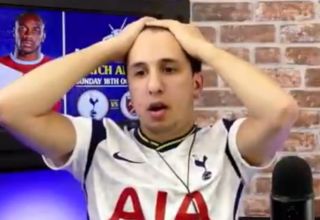 It’s not clear if fan TV stations are deliberately made up of unlikeable people of if that’s just a total coincidence, but there’s always something funny about seeing them go from smugness to dejection.

There was a lot of talk from Spurs fans about winning the league after an electric start today and the pundits of We Are Tottenham TV were certainly feeling positive about things.

Obviously that turned on it’s head when West Ham scored three times in the final few minutes, and the reactions coupled with the music here are utterly glorious to see:

these two don’t help themselves pic.twitter.com/9i1b9WkPQV