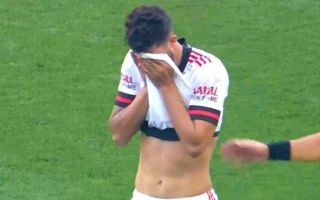 Ordinarily, Henrique would be heading home delighted that his side triumphed so emphatically over Corinthians, a victory which took Flamengo level on points with league leaders Internacional.

However, as good as a day it was for Flamengo as a collective, it was an absolute horror show for Henrique, who was forced off the field after suffering damage to his testicle.

It’s not for the fainthearted, so look away now if you’re eating your breakfast or have a generally weak stomach.

Flamengo CB Gustavo Henrique has been subbed off after suffering from a testicle injury.

I’ll give you a moment to regain your composure before we continue.

Journalist Rosely Pereira later reported that it was a direct trauma to Henrique’s testicle which caused the damage, with the injury under observation in the Flamengo dressing room.

Let’s hope that it’s nothing too serious and Henrique will not be forced to miss any great deal of action for Flamengo. That’s going to be a sore one for a few days, though, no doubt.