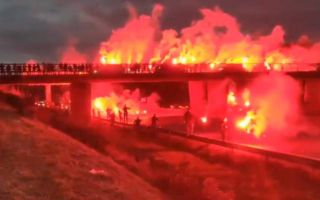 It’s a huge frustration for football fans that they remain unable to watch their beloved sides play amidst the ongoing COVID-19 pandemic – but that hasn’t stopped the Rennes faithful showing their support.

While in the vast majority of European countries football fans are still having to watch their teams play on the tele, Rennes fans were determined to give their side the necessary lift ahead of their Champions League tie with Krasnodar tonight.

Rennes, who are in Group E with Chelsea, host the Russian side this evening, and have a look at the hero’s welcome they received as they headed to the stadium on the team bus.

Pundit names the Liverpool star who is a manager’s dream

English football fans are renown for being crazy about the game, but it’s scarce that you see them go to these lengths ahead of Champions League games against nobodies. Maybe that’s where Premier League clubs went wrong in the competition last term…