While nobody will ever live up to Robbie Keane’s shameless attempts to immediately get the fans onside when joining a new club, it looks like Lucas Torreira has given it a good go at Atletico Madrid.

He was expected to leave this summer due to a lack of first team action but it took a long time to get done, while Thomas Partey moving in the opposite direction should give him more chances to get into the team.

Torreira has always been known as a talented player who welcomes the scrappy side of the game. so it does look like he’ll be a great fit for Diego Simeone’s team.

He recent conducted an interview that was picked up by Spanish outlet Fichajes, and it’s clear that he’s very happy with how things worked out this summer:

“My wish and my dream has always been to be able to reach Atletico Madrid.”

“it’s a goal I’ve set myself since I came to Italy when I was 17. And I’m not saying it because I’m here now, but I’ve never been encouraged to say it before because you know that maybe at some point you can’t get to give that dream. But today, really, when I was 24, I can tell. I have achieved this goal.”

“Last season at Arsenal, on a personal level, it has not been good for me at all.”

It’s only a loan spell for now so his future at Atletico may come down to how well he plays, but it does look like he’s hoping to stay on a permanent basis:

“It all depends on how I go during the season, which I hope is very good. And maybe in the future I can stay at the club. It’s my idea too, because that’s what I want and what I really crave.”

It’s some strong words that could potentially harm has chances of having a long term future at The Emirates, but it clearly wasn’t working out so a permanent exit might be the best thing for both teams. 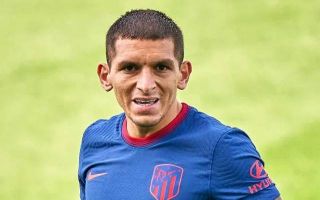