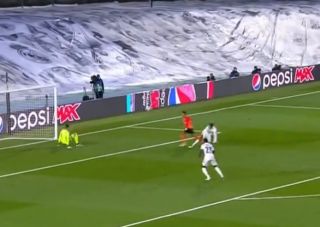 Zinedine Zidane did decide to rest a few of his key players today, but they still expected an easy victory after Shakhtar Donetsk were forced to play despite missing at least 9 of their regular starters.

Things haven’t gone to plan for the hosts at all as they’ve struggled to create meaningful chances, and they are up against it now after two quickfire goals.

There’s some poor defending for the first as they struggle to get the ball clear, and Tete is there to calmly stroke the ball beyond Courtois and into the net:

It's been coming! Tetê arrows a shot into the bottom corner out of the reach of Thibaut Courtois!

It got worse minutes later as Varane managed to turn the ball into his own net in fairly comical fashion:

Own goal! Tetê's shot rebounds off Verane! The Ukrainians are 2-0 up! Madness!

Not getting past the group stages would be a huge blow for Real and they could be in big trouble if they get off to a poor start, so Zidane needs a reaction from his team here.