Manchester United new-boy Facundo Pellistri has been snapped by his girlfriend playing FIFA – with Cristiano Ronaldo back at his old club!

Pellistri signed along the dotted line with Man United late in the summer transfer window, completing his transfer from Uruguayan top division side Penarol.

The 18-year-old will go through quite the culture shock swapping Uruguay for Manchester and Penarol’s minnows (all due respect) for the likes of Bruno Fernandes and Paul Pogba.

He appears willing and excited to play with the best, though. His girlfriend Cami Garcia posted a picture of Pellistri playing FIFA on her Instagram story – and Cristiano Ronaldo is back in a Man United shirt. If Pellistri has an ounce of the ability Cristiano has, he’ll do well at Old Trafford. He will be looking to follow in the footsteps of the greats, but that’s quite a task at United, because they’ve had some other-worldly talents over the years.

Thankfully for young Facundo, he has his beautiful girlfriend Cami to help ease the transition into life in England. Don’t they just look adorable together… 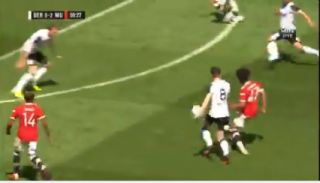