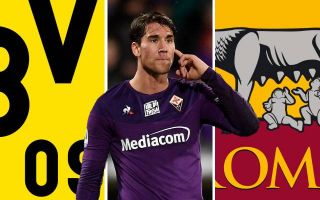 Fiorentina forward Dusan Vlahovic was the subject of two hefty offers over the summer transfer window, according to Italian outlet La Nazione.

Vlahovic, who stands a 6ft 3inches tall at just 20-years-old, netted eight goals for Fiorentina last season. He is considered one of Serie A’s hottest prospects, and as per La Nazione, Fiorentina were forced to resist temptation to cash-in on him over the summer.

Le Nazione report that Roma were so impressed with Vlahovic that they were prepared to offer €40M in exchange for Fiorentina’s prize possession, while Borussia Dortmund were also keen, with their valuation nearer the €30M mark.

With Federico Chiesa departing Fiorentina in the summer to sign for Juventus, it likely put them in a position where they could feasibly reject offers of that size for Vlahovic. It’s probably wise, too, as the more he players, the better he will get and the more they will get in exchange when he does eventually leave.

For now, though, Roma and Dortmund will have to remain patient.