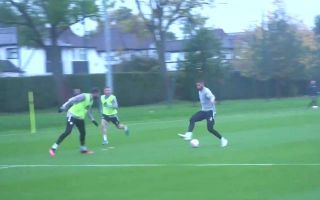 Chelsea loanee Ruben Loftus-Cheek is looking back to his brilliant best in Fulham training.

Loftus-Cheek established himself as a key figure in Maurizio Sarri’s Chelsea side before being injured in a US-based friendly looking to eradicate anti-Semitism in football.

He subsequently missed the Europa League final, and with the injury being worse than first thought, he did not feature for several months of Frank Lampard’s Chelsea rein.

Loftus-Cheek struggled to force his way back into Lampard’s thinking, and with Chelsea adding to their host of midfield talent with the acquisition of Kai Havertz in the summer, the route to the starting XI was blocked.

As a result, he left the Blues on loan, moving to local rivals Fulham on a season-long loan. He looks as though he’s wasting no time showing manager Scott Parker what he’s capable of.

Have a look at this clip from Fulham training. This is Loftus-Cheek at his best – explosive, positive and finding the finish. If he can replicate this in matches, he’ll be going to the Euros next summer.