Arsenal’s Premier League 2 clash against rivals Manchester City has seen quite the action-packed first-half of play.

Just a minute after one of Arsenal’s new recruits in Nikolaj Moller scored six minutes into his debut for the Under-23s, a nightmare struck as Gunners goalkeeper Karl Hein was sent off.

Hein rushed out of the box and brought down Felix Nmecha, leaving the referee no choice but to show a red card.

The north London outfit had just three substitutes on the bench, none of which were goalkeepers so up stepped 17-year-old centre-back Taylor Foran to deputise between the sticks.

? HALF-TIME: #MCFCU23 1-1 #AFCU23 @nikolajdmoller opened the scoring on his debut, before Karl Hein was sent off and defender Taylor Foran replaced him in goal for his #PL2 debut! ?

Nmecha then went on to equalise for the hosts. Big second half coming up ? pic.twitter.com/2o7yFRHFKe

10-man Arsenal u23s make it to half-time at 1-1. Centre-back Taylor Foran has made six or seven saves.

There was a late City goal ruled out for offside.

To make the moment even more intense for Foran, this is the ace’s debut for the Under-23s. Unfortunately despite the talent’s best efforts, the Citizens equalised in the 24th minute.

But as the reliable Dan Critchlow reports, Foran has already made ‘six or seven’ saves, a truly inspired performance from the defender – will 10-man Arsenal be able to hold on against the Citizens?

On the Hein front, the youngster did also show his shaky streak in the recent international break, with the stopper making a costly error for the Estonia’s senior national team. 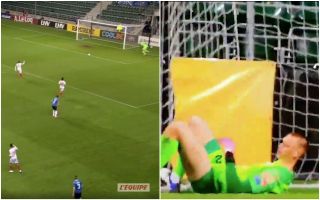