Brazil’s international physio has accidentally let it slip when Liverpool goalkeeper Alisson will be returning to full fitness after suffering a shoulder injury. Brazil’s medical-man has suggested that the elite shot-stopper could be back in action for his club side’s match against West Ham.

READ MORE: Chelsea defender lined up for January move by Serie A trio including champions Juventus

Alisson, 28, joined Liverpool from Serie A side AS Roma in 2018 in a move which costs the Reds a whopping £56.25m, as per  TransferMarkt.

Liverpool’s Brazilian keeper has featured in a total of 92 matches in all competitions and has managed to keep a whopping 45 clean sheets.

The world-class keeper has helped to shore-up Jurgen Klopp’s back-line and has been a huge contributor in his side’s on-field fortunes after guiding the Merseyside giants to their first ever Premier League title last season.

However, having recently suffered a nasty shoulder injury, the South American was forced to miss his side’s last two games including their 7-2 thrashing against Aston Villa.

According to Alisson’s international physio, Fabio Mahseredjian, the keeper will be fit to face West Ham on October 31.

Speaking ahead of Brazil’s internationals next month as reported by Metro, Mahseredjian said: “Alisson had a shoulder injury on September 30, a trauma.

“An athlete from his own team fell on his shouldern and on October 15 he was back for training sessions.

“Dr. Rodrigo Lasmar [Brazil Chief Medical Officer], in contact with Liverpool’s medical department, gave us a heads up by saying that Alisson would probably be available to Klopp, to Liverpool’s technical staff, on October 31.”

“He would have three games before joining the Brazil team.

“Look, in my situation, I don’t want to rule anybody out until someone tells me and so far, nobody told me.

“Maybe I should have listened better! But for me, everybody apart from the three I mentioned are in contention until somebody tells me different.” 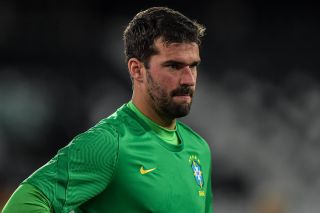 ‘Genuinely a centre-forward’s header’ – McCoist in awe of Alisson’s stoppage-time winner for Liverpool May 17 2021, 11:15
Liverpool FC