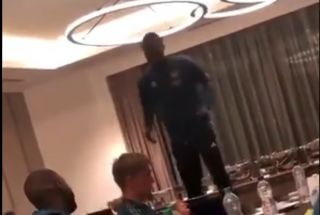 Usually an initiation song only goes public if a player has a terrible set of pipes on them, but this is one of those occasions where it’s actually quite a nice moment.

It’s not quite clear which song Thomas Partey has chosen to serenade his new Arsenal teammates with, but it’s fun to see that he’s got them all involved and clapping along with him:

It’s absolutely more about his showmanship rather than his signing ability, but this is one of the better efforts out there.