Mendy was hailed as Chelsea’s hero after his superb stop denied Manchester United striker Marcus Rashford late-on in their tussle with the Red Devils at Old Trafford.

The scores finished 0-0, meaning that Mendy marked his second Premier League appearance with his second clean sheet, something that will have made Frank Lampard feel much better about Chelsea’s defensive frailties.

Though Mendy, signed from Rennes in the summer, has made just the two appearances so far, as this infographic reveals, he is already leading the way out of all the top six goalkeepers. 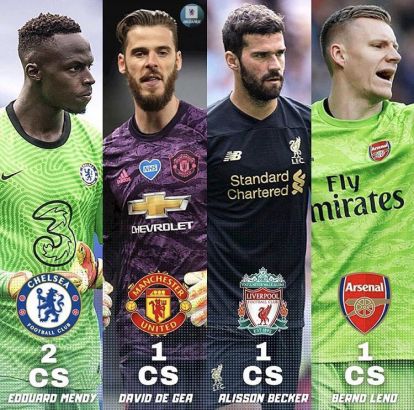 Alisson Becker has been out injured, but Liverpool’s defence has been so poor so far this term that it’s hard to believe he could have helped the Reds in any degree during their 7-2 defeat to Aston Villa.

Every other top-six side and goalkeeper has found it difficult to get clean sheets under their belts thus far – but not Mendy, who also kept one in the Champions League last Tuesday.

What a player Chelsea look to have got their hands on…