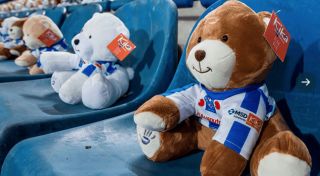 It’s surely one of the more heartwarming images of the season.

Dutch top-flight side, Heerenveen, decided to festoon their stadium with 15,000 teddy bears.

The reason was completely admirable too.

Very simply it was to raise awareness of children suffering from cancer in the Netherlands, and also to raise money for them.

Football will always remain the priority for clubs of course, but it’s great to see some getting involved with causes of great humanity.

Heerenveen placed 15,000 teddy bears in seats around their stadium to raise awareness and money for kids suffering from cancer in the Netherlands.