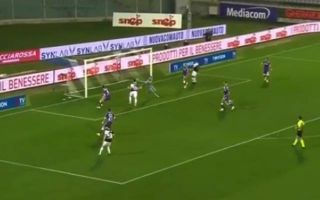 Udinese striker Kevin Lasagna submitted his entry for miss of the season against Fiorentina last night. It’s early doors – but it’s going to take some beating.

We’ve seen some truly horrific misses over the years from strikers with real goal-scoring pedigree, from Fernando Torres against Manchester United to Nwankwo Kanu during his time at West Brom.

Some forwards are only remembered for their misses, rather than their goals. If you asked any Nigerian football fan for their opinion on Yakubu, they’d probably mention THAT miss in the World Cup.

Udinese fans are not going to forget this one from forward Kevin Lasagna any time soon, either.

The Serie A outfit were defeated 3-2 by Fiorentina on the night, and you could be forgiven for thinking it’s entirely Lasagna’s fault for failing to steer this one in from inside the six-yard box.

It’s a shocker – and Lasagna’s not going to want to see this one again.