Many would consider Messi to be the best dribbler of a ball in the world – and one of the best ever to lace up a pair of boots. We’ve seen countless solo goals produced by the Argentine over the years, leaving defenders in his wake and applying the finishing touch.

However, there’s no room for the Barcelona superstar in the top five of this particular stat area. u/ironnybest posted the below infographic on Reddit – and the player at number two might raise a few eyebrows.

MORE: PSG plan ambitious Barcelona transfer raid that could have repercussions for Liverpool 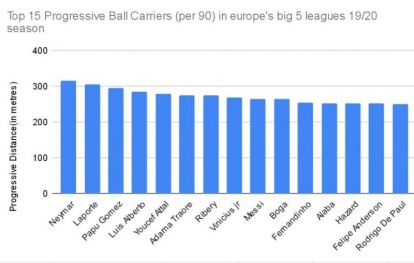 Aymeric Laporte, the Manchester City centre-back, sits marginally behind PSG winger Neymar at number two. The Frenchman is a more progressive dribbler than Adama Traore, Lionel Messi or Eden Hazard, as per the stats.

This could be easily explained by the fact that teams sit deep against Man City, allowing the centre-back to have plenty of time on the ball and stride into midfield.

Few would be surprised to see Neymar at number one. He’s not one to shy away from taking on a man.

Messi being so low down on the list could be an indication of both his natural decline through age and a change of role at the Nou Camp. In recent seasons, especially following the departures of Xavi and Andres Iniesta, Messi has become less of a goal-crazed forward and more of a distributor.

Still, it’s bizarre to see Laporte so far ahead of him in an area like this.