Signing a new left back didn’t actually seem like a major priority going into the summer for Man United, but it became a pressing need as time went on.

Brandon Williams looks like a decent player who needs to go on loan for a season or two to develop as a regular starter, but he’s not ready for the top level just now.

Luke Shaw’s drop off in form was a bit more mystifying, as he went from being a good first team option who did have some consistency issues to an absolute disaster in the defence.

READ MORE: Dates suggest Man United scouts were tracking star from their Champions League opponents before they were drawn together

There’s a feeling that his erratic performances had led to Harry Maguire’s form getting even worse because he was trying to cover two positions, so the eventual signing of Alex Telles was very welcome.

They allowed that transfer to drag out for weeks so he still needs time to settle in, and it looks like he won’t be playing a part against Leipzig tonight.

The Express reported that he doesn’t appear to be part of the squad for the game this evening, and it’s not gone down well with plenty of the supporters:

No Telles for United today. ? Was looking forward to those beautiful crosses today but clearly Utd can't have us being happy. #UCL

No Telles in the team tonight?! Another day of Lardy not doing over lapping runs for Bruno then

No Telles and Lindelof in the squad for tonight? All I want is a LB that can cross we finally have one and he’s not playing wth! Regarding lindelof minor cause the beast that is Tuanzbee should be playing anyway! #mufc

No Telles again tonight after his incredible debut. If Van De Beek doesn't start you have to start asking questions about Ole and his transfers here. Why buy them if he doesn't think they're better than what he already has? #Mufc #ManchesterUnited #MUNRBL pic.twitter.com/E6bNYcP3QS

I swear if we start Mctominay and Fred again i’m gona be Ole out. That can’t possibly be our best midfield partnership. It worked against PSG but, we have Paul Pogba and Donny VdB on the bench, what the hell. No Telles on the team sheet either ???! What the hell is going on

No telles in the squad. Imagine if we had sign Sancho and Ole keeps him on the bench or out of squad because James could run from now till the next generation

No Telles again. Am told he is just another Eric Bailly. Niggles and injuries. The recruitment at this club man #MUFC.

It’s not clear if he’s injured or if he simply needs more time to settle in with his teammates before playing more regularly, but it’s certainly a blow ahead of a big game. 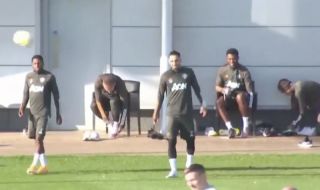