The Turkish playmaker’s contract expires next summer, leaving Calhanoglu open to pre-agreeing a free transfer to a club outside Italy from January onwards.

It’s reported that Milan have only offered the ace a net salary of €3m a year, with Calhanoglu demanding around double this, plus bonuses.

The report adds that that a meeting is scheduled or the next few days, which could prove to be decisive in figuring out the 26-year-old’s future.

Milan Live also suggest that Inter Milan and Juventus are interested in the attacking midfielder, with keen eyes from Spain as well. 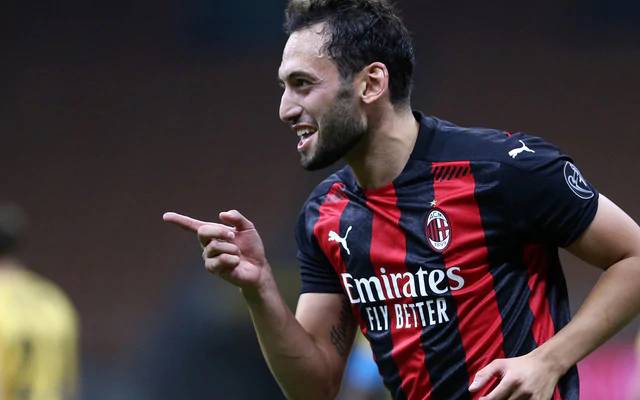 The Rossoneri also face losing academy product Gianluigi Donnarumma next summer, with the 21-year-old set to command major interest due to his vast experience as well as his young age.

It’s added that Calhanoglu doesn’t exactly wish to leave the San Siro outfit, but the club have some serious work – and massive differences to shorten in order to avoid losing a key player.

Calhanoglu joined Milan in the summer of 2017 from Bayer Leverkusen, with the attacking midfielder scoring 27 times and registering 40 assists in 137 appearances for the Rossoneri.

The 50-cap Turkey international already has four goals and four assists from eight appearances so far this season, with most of those coming in the qualifying stages of the Europa League.

Calhanoglu could be a fine addition for someone like Man United, especially on a free transfer, but that would depend on how their squad shapes up.

The Red Devils could certainly do with another playmaker who boasts a serious set-piece threat if Juan Mata was to leave anytime soon, but their prime creator right now is Bruno Fernandes.

Calhanoglu could play a like-for-like role to Mata, with the Turkish star seeing his time at Milan split between being on the left-wing and playing in a No.10 or playmaking No.8 role.