Liverpool have issued an official statement denying that they’re employing staff on zero hour contracts after a post by a Reddit user claimed the club were being exploitative during lockdown.

The Reds are generally thought of as being a club with class and with a social conscience, though they came under fierce criticism earlier this year when they opted to use the Furlough scheme.

Many businesses, including football clubs, have struggled with restrictions due to the coronavirus pandemic, but Liverpool should be better placed than many to deal with the crisis, so people were unimpressed with their actions.

Still, LFC now insist there’s no truth to the claims being made by an alleged staff member posting anonymously on Reddit.

See below for a screen grab of the post, which also attached screen shots of alleged conversations on WhatsApp with other employees at the club… 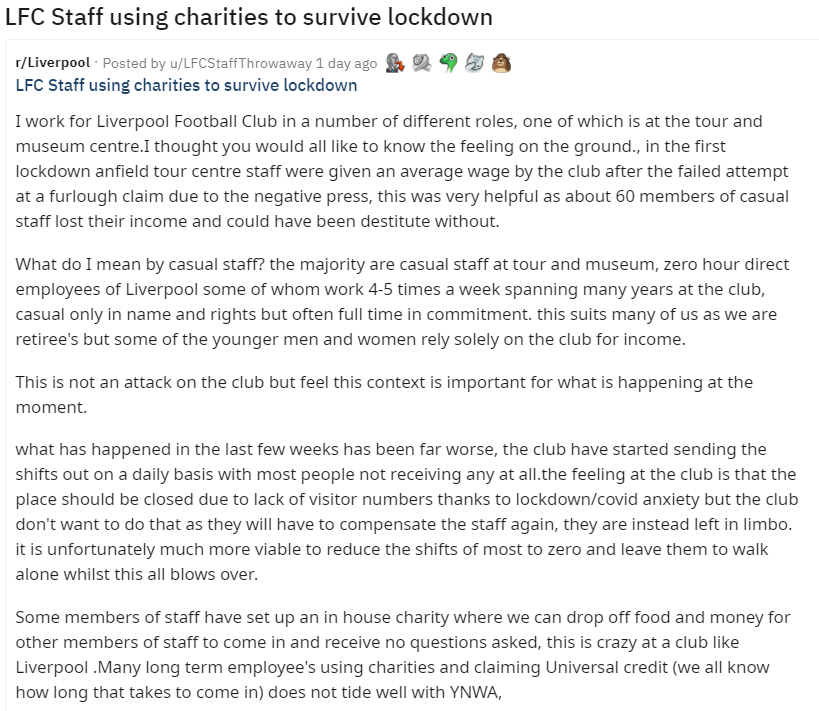 Liverpool accept that they’ve had to make some changes to the way they operate, but attempted to clear things up with the statement below:

“It’s important to first clarify that as a club we do not have any zero hours contracts. We do, however, have colleagues who work with us on casual contracts who supplement our core staffing.

“At the beginning of lockdown in March our mission was to protect as many jobs as possible and so we paid our casual contract workers what they would expect to earn if football matches hadn’t been suspended. We did this for four months which was very much a payment of goodwill which we made clear at the time.

“Since then we have tried to ensure as many casual workers are offered as many shifts as possible during these uncertain times including offering shifts in different roles in other parts of the club, yet up to now we have seen a very low take up on these shifts that have been made available.

“As a club we are very aware of the challenges that face our city and our staff and protecting the jobs of both our permanent and contracted workers has been our top priority.

“Now almost eight months on from the beginning of the pandemic it is an unavoidable truth that our club, like many businesses, has seen a huge downturn in revenue which has impacted our ability to operate as we previously have.”