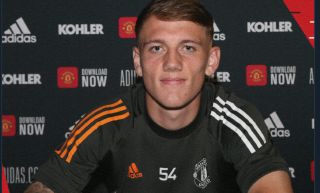 It’s always interesting to see a talented young player make a senior appearance for their country before playing for their club, but that was the situation that Ethan Galbraith found himself in last year.

He’s been a standout at youth level for Northern Ireland all the way up from U17, but it was still a surprise when he made his senior debut against Luxembourg last year.

It shows that he’s a young player who clearly had a big future in the game, and Man United have moved to tie him down to a long term contract:

Congratulations to Ethan Galbraith, who has signed a new #MUFC contract! ??

He’s agreed a new deal which will keep him at Old Trafford until 2023 at least, but the club confirm they do have the option to extend that by a further year.

He did make his debut for United in the Europa League later last year, but it doesn’t sound like he’s going to be getting many chances in the team this year.

The United press release confirms he’ll look to improve his talents behind the scenes so it looks like he will simply be a part of the U23 team for now.

That will only help his development to a certain degree, so it could make sense to send him out on loan in January to a lower league club to give him some first team experience.