Jorginho missed another penalty for Chelsea against Krasnodar last night. We’ve identified three players who could take the responsibility from him going forward.

The Italian faltered from the spot against Liverpool earlier in the season, ending any hopes of a Chelsea revival against the champions. He stepped up once more yesterday evening and the result was the same.

He has been Chelsea’s number one penalty taker ever since his arrival at the club, with his ‘hop, skip and a jump’ routine proving successful. However, with his penalty record taking a turn for the worse, here’s three players who could step into his shoes. 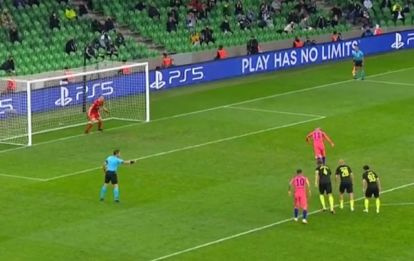 Perhaps the obvious choice, Timo Werner was on penalty duty for RB Leipzig last campaign and had the opportunity to take one yesterday evening after Jorginho was substituted. He made no mistake.

Unlike Jorginho, who tends to keep his eyes on the goalkeeper before rolling it either side, Werner puts his foot through it, hoping that the ball is past the keeper before he has an opportunity to react.

Taking penalties would be a great way for Werner to buff his goal scoring numbers for Chelsea and keep his confidence high. If Jorginho is taken off penalty duty, he should be top of Lampard’s list to replace him.

Ziyech started his first game for Chelsea against Krasnodar yesterday evening, scoring his first goal for the club. He’s a reliable finisher in front of goal, so ought to be in the conversation regarding penalties.

As shown by data provided by Transfermarkt, Ziyech has scored 13 penalties in his professional career, 11 of which have been for his country. The Moroccan national team have put their faith in the winger plenty of times from 12-yards, and he hasn’t let them down.

Should Lampard do the same?

This one might raise a few eyebrows, but not among the Chelsea faithful. Cesar Azpilicueta has stepped up in penalty shootouts for Chelsea on multiple occasions, with the end result usually being a perfectly despatched finish.

The Spaniard’s record is marred by his penalty miss in the Europa League semi-final shootout against Frankfurt, but if you go back and watch it, he placed it almost as far in the bottom corner as he could. It took a super stop from Kevin Trapp to deny him.

While Azpilicueta may soon be phased out for Reece James to come in and occupy the starting spot at right-back, when he is on the field and Chelsea are awarded a penalty, he is a legitimately good option. He has a proven track-record – so why not?