WhoScored‘s Champions League team of the week for match week two has taken shape – and there’s no room for hat-trick hero Marcus Rashford.

The second round of fixtures in this season’s Champions League was a happy one for Premier League clubs, with all four picking up three points in their respective quests to reach the last 16.

Chelsea defeated Krasnodar 4-0 away from home yesterday evening, with Manchester City winning 3-0 in Marseille the day prior. Liverpool made hard work of their contest with FC Midtjylland but recorded a 2-0 win, while Manchester United demolished Bundesliga leaders RB Leipzig in a 5-0 triumph.

Three of United’s goals on the night were scored by Marcus Rashford MBE, who came on as a second-half substitute to wrap up the victory in emphatic fashion. However, Rashford has not been included in WhoScored’s team of the week for this match week. 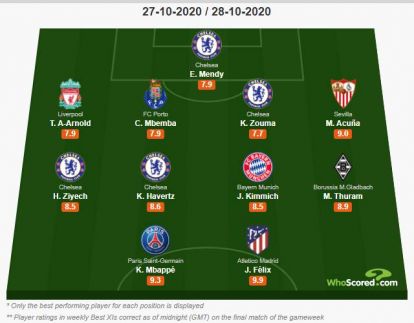 Rashford only managed a WhoScored match rating of 9.16, meaning there was no room for him ahead of PSG’s Kylian Mbappe or Atletico Madrid’s two-goal Joao Felix.