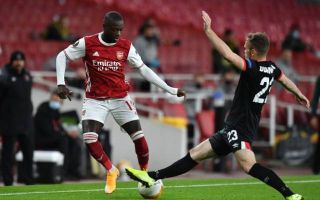 Arsenal defeated Dundalk 3-0 at the Emirates yesterday evening – but their opponents achieved something never done before in Europa League history.

A second-string Arsenal side made light work of the Irish outfit, with three goals between the 42nd and 46th minute proving enough to secure Mikel Arteta’s men all three points, despite the performance not being as good as he will have hoped.

Dundalk were not expected to get anything out of the fixture, with Arsenal being one of the most financially powerful and successful clubs on the planet, but they did achieve a Europa League first, and quite a bizarre one too.

0 – Dundalk are the first side to avoid committing a single foul in a Europa League game (2009-10 onwards). Careful. #UEL pic.twitter.com/oCQYY9fbCB

It’s not clear whether there was intention not to conceded set-pieces from Dundalk, or whether it was a masterclass of tackling, but to not commit a single foul in 90 minutes is incredible. It’s no surprise to hear it’s never been done before in the Europa League.

Credit to them, with the BBC reporting that Arsenal committed a total of 20 fouls in the game. That’s quite a disparity. How strange is that?