Just one Premier League player has been included in WhoScored‘s Europa League team of the week – and it’s not even at his parent club at the moment.

Arsenal, Leicester City and Tottenham all played their part in Europa League matchday two, with the Gunners defeating Dundalk 3-0, Leicester winning 2-1 away in Athens and Tottenham falling to a 1-0 defeat to Royal Antwerp. It’s safe to say it’s a mixed bag of results.

There were good performances from Mikel Arteta and Brendan Rodgers’ men yesterday evening, though. Despite that, no Arsenal or Leicester players have been included in the WhoScored Europa League team of the week.

In fact, the only Premier League player in the team this time around is Manchester United’s Diogo Dalot, who’s currently on-loan at AC Milan, who he scored for during a 3-0 win over Sparta Prague. 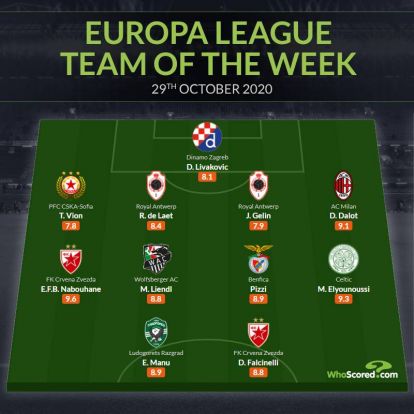 WhoScored will need a better showing from Premier League players next time around in order to include them in their team of the week.

Jose Mourinho will definitely be expecting one, too, else his Spurs side face the possibility of not topping their group. Now that’d be embarrassing…