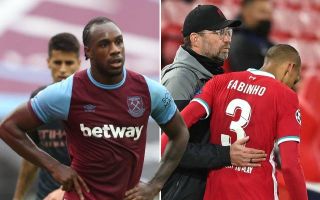 Bad news for David Moyes and West Ham, in-form forward Michail Antonio has been ruled out for a month with a hamstring problem, report the Guardian.

Antonio has been one of the Premier League’s finest since the restart. His goals at the tail end of last season were a huge contributor to West Ham being able to avoid relegation, where they had previously looked doomed.

He already has three goals to his name in the current Premier League campaign, with his latest being an acrobatic effort against Manchester City last weekend. Unfortunately for Antonio, he was unable to escape that fixture unscathed.

The Guardian report that Antonio will be unavailable for selection for West Ham for a month after suffering a hamstring problem. That’s a huge blow for the Hammers, who have been in great form of late.

It’s unclear how Moyes will restructure his side in the absence of Antonio, but one thing’s for sure, it’s a boost for Liverpool, who host West Ham at Anfield tomorrow afternoon.

Liverpool have lost Virgil Van Dijk to injury long-term, with Fabinho also limping off in the Champions League midweek. Not having Antonio to contend with is great news for what will be a makeshift back-line fielded by manager Jurgen Klopp.