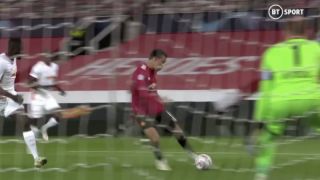 Manchester United’s teenage sensation Mason Greenwood continued on his impressive rise to the forefront of European football after opening the scoring against RB Leipzig in the Champions League earlier this week.

United went into Wednesday’s second Group H match off the back of an opening 2-1 win over Ligue 1 giants Paris-Saint Germain with manager Ole Gunnar Solskjaer opting to recall 19-year-old striker Greenwood to the starting line-up.

The youngster did not let his manager down after opening the scoring after just 21-minutes.

Getting on the end of a superb through-ball from team-mate Paul Pogba, Greenwood steered the ball past RB Leipzig keeper Péter Gulácsi and perfectly into the corner of the goal.

A slow-mo clip of Greenwood’s movement and finish has revealed how he does not look at where the goal is once during his run.

The boy is arguably one of the world’s most naturally clinical finisher and it’s not hard to see why from the clip below.

England U21 omission could be the perfect timing for Man United’s Mason Greenwood to give him a break November 12, 2020 20:00
Manchester United FC