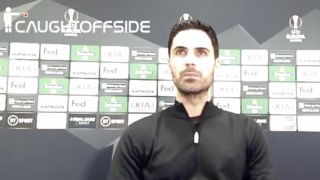 Arsenal manager Mikel Arteta is now fully focused on his side’s weekend trip to face-off against the in-form Manchester United in the Premier League on Sunday.

Arteta watched on as his Gunners side beat Dundalk 3-0 in the Europa League group stage last night.

Three goals in four minutes from Eddie Nketiah, Joe Willock and multi-million pound man Nicolas Pepe secured all three points for Arsenal who now sit top of their group with six points from a possible six.

Speaking after the game Arteta admitted he was happy to give some his fringe players valuable game-time but admitted all focus must now turn to travelling to Old Trafford.

Arsenal will face United on Sunday in a hotly anticipated domestic tie with both sides looking to build on their recent European successes.