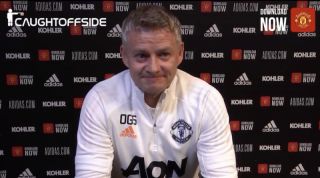 Manchester United manager Ole Gunnar Solskjaer has admitted that he fancies his side’s Premier League title chances after predicting neither Liverpool or Manchester City will run away with the points this season.

READ MORE: PSG given Neymar prognosis after superstar limped off in the Champions League

United haven’t lifted the Premier League since legendary boss Sir Alex Ferguson’s finally season in 2013 and have been forced to watch fierce rivals Liverpool and City both claim domestic success in the last two years.

Solskjaer was able to guide United to a third place finish last season and is hoping to go a little better this time out.

Speaking ahead of United’s important Premier League clash against Arsenal on Sunday, Solskjaer was asked how he sees this season’s title race shaping up, he said: “I think football has developed and so many clubs have developed strength in depth and the ability to challenge for the trophies, even though last two seasons you had two teams running away with it.

“I think this season a lot of us just underneath them would hope to put up a challenge, back then it was us or Arsenal, and then Chelsea came through.

“Now it’s more exciting for me and the fans that it’s not one of these two.

“Anything can happen this season with what’s happening around the world and we’re just taking one game at a time.”

Solskjaer went onto talk up his side’s progression since his arrival as permanent manager back in March 2019, he said: “Well, we keep on working, want to develop, we want to improve, it’s not up to me to say how far we’ve come but I’ve been very pleased with the response after what we did early on in the season, we knew we had to hang in early on and try to get points on the board because we were far behind but now we feel fit and strong and competitive in every game.”

“You’ve had two teams running away with it. I think this season, a lot of us just underneath them would hope to put up a challenge” ? #mufc #mulive pic.twitter.com/4DKuQYMZld